Zinc is a commonly used element for the anode of dry-cell batteries, but at the same time, is prone to corrosion which causes gas to develop inside. Not only does the efficiency of the battery decline as a result of gas buildups, but it also poses other dangers such as the swelling, leaking and/or exploding of batteries. Hence, in order to prevent and suppress corrosion from taking place, mercury is intentionally added into the battery. In other words, mercury plays an indispensable role in protecting the capacity and safety of batteries containing zinc.
In particular, mercury continues to be present in button cell batteries, as the small casings of these batteries make it difficult to create leeway for gas buildup. The text of the Minamata Convention on Mercury has been written to take into account these factors, as it excepts “button zinc silver oxide batteries and button zinc air batteries with mercury content of <2%” from being banned under Article 4 of the Convention. For cylindrical batteries, however, there are alternatives to using mercury in batteries. Manufacturers in Japan have started producing zero mercury batteries for zinc-carbon batteries (since 1991) and alkaline batteries (since 1992). 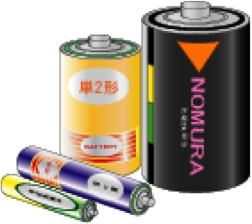 A fluorescent lamp is a low-pressure mercury vapor lamp that relies on the reaction of fluorescence and mercury to produce light. An electric current is provided to the electrode (thermionic emission) which then collides with the mercury atoms that are enclosed in the lamp tube, producing ultraviolet rays (253.7 nm). The ultraviolet rays subsequently cause the fluorescent substances on the inside of the tube to produce visible light.
At present, a 40W linear fluorescent lamp produced in Japan contains approximately 5~7 mg of mercury.
Evidently, a small amount of mercury is needed for the proper functioning of fluorescent lamps. This is also reflected in the Minamata Convention on Mercury, where fluorescent lamps with less than a certain amount of mercury is not covered in Part I: Products subject to Article 4, paragraph 1 of Annex A.